What are the Causes & Treatments for Male Pattern Baldness?

What are the Causes & Treatments for Male Pattern Baldness? 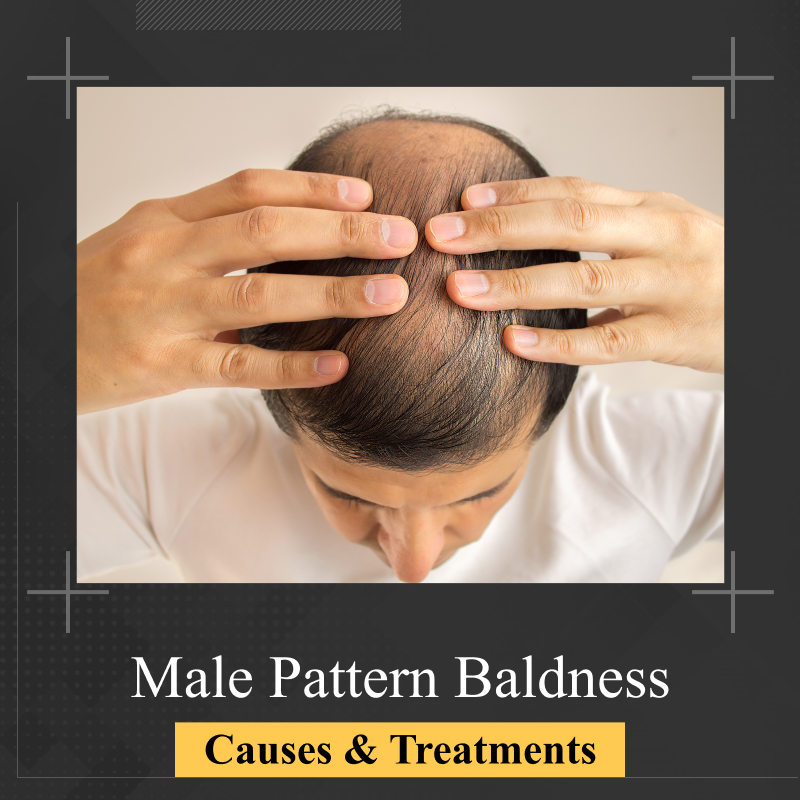 More than 50% of men in their lifetime go through a hair loss condition known as male pattern baldness. A receding hairline on the front and sides or thinning hair on the crown portion of the head are some common symptoms of baldness in men. It is advised that if a person starts losing more than 100 hairs in a day, then they must seek hair loss treatment by a hair specialist immediately.

Unfortunately, for most men, they lose over 50% of the hairs on their scalp before noticing any baldness pattern emerging. While hair loss can be attributed to several factors such as genetics, stress, nutritional deficiency, and more reasons, male pattern baldness is the most common cause found for hair loss in men.

What is Male Pattern Baldness?

While this type of baldness is more common in middle-aged or older men, androgenetic alopecia can also affect younger men who are in their 20s and 30s. The common symptoms of male pattern baldness include a receding frontal hairline, a thinning crown area, and diffuse hair thinning affecting the entire scalp.

The most common reason for male pattern baldness is hereditary factors. Genetics play a crucial role and it has been often seen that those with a family history of baldness are at a higher risk of getting affected by this condition.

The other major cause could be the increased levels of androgen, a male sex hormone, in your body. For example, having a high level of testosterone. The higher presence of androgens in your body can potentially disrupt the hair growth cycle of anagen-catagen-telogen and result in no new hair growing in the follicle. This leads to a permanent hair loss.

The most visible sign of male pattern baldness is hair loss. But on an average, most people shed between 60-100 hair strands daily. This is part of the natural hair growth cycle and nothing to be alarmed about. One should consider seeking hair loss treatment by a professional in the following given scenarios.

For those affected by male pattern baldness, the hairs on the front and sides of the scalp slowly start diminishing in volume. As a result, men gradually start sporting a M-shaped hairline.  If you start noticing any considerable change happening to your hairline, then it might be advisable to consult a specialist.

In some cases, male pattern baldness does not affect the hairline at all. But the hair in the crown region starts thinning and then eventually falls off completely.  Since one cannot see the top of their head, this sort of hair loss often goes undetected unless it is in an advanced stage.

This is a form of hair loss that affects the entire scalp on your head. Visible hair thinning can be seen in different parts of the scalp, but does affect the hairline visually. For the men who have thin hair density, this symptom is easily detected in early stages.

When you visit a hair doctor, he/she will first try to salvage the situation by prescribing medicines such as Finasteride and Minoxidil. These are common treatments for androgenetic alopecia and is helpful in managing early stages of hair loss.

Finasteride is an oral medication and Minoxidil is a hair solution to be applied on the affected areas of the scalp. Regular usage is known to produce guaranteed hair growth results over a period of 6-8 months. Both these medicines should only be taken based on the prescription of a doctor.

In a hair transplant surgery, healthy hair follicles are removed from the donor part of your scalp and then transplanted onto the balding portions known as the recipient area. In most cases, hair is taken from the back or the sides of the head as the hair in this region is genetically programmed to never fall off. When these follicles are transplanted to other parts of the scalp, the new hair that grows also never falls off. Hence, it gives a permanent solution to hair loss problems.

For patients who are suffering from an overall thinning of hairs, scalp micropigmentation could be a great solution for you. This is a cosmetic procedure where micro-needles are used to deposit pigment on one’s scalp, giving them an illusion of fuller head of hair. This is not a real cure, but more of an aesthetic solution.

In this form of treatment, patients are exposed to multiple sessions of low-powered laser therapies to their scalp. The light energy emanated during this process stimulates the hair follicles, which in turn, boosts new hair growth.

Male pattern baldness is a common hair loss condition. It can disrupt your natural hair growth cycle and stop your follicles from growing new hairs. If you’re suffering from any early symptoms, we suggest visiting a reputed and trusted hair transplant clinic in India such as Saraswat Hospital in Agra. Consult with the leading hair experts of the country to receive personalised treatments for your hair loss problems.