Liposuction, also known as suction-assisted fat removal, is a surgical procedure in which fat is drawn out from an area of the body that contains an excess accumulation of it. It is not an alternative to proper diet or regular exercise. Rather, it is a means of achieving body contouring and is not to be treated as a weight-loss method. The maximum extraction limit of fat during liposuction surgery is 11 pounds (5,000 millilitres). This amount is set regardless of the variations in the body fat and weight status for all patients.

A liposuction surgery removes the fat cells (also called Adipose cells) by sucking them using special cannulas (hollow tubes made of stainless steel or any other hard metal) and aspirators (a suction device). This surgery is mainly used for double chin, gynecomastia, abdominal fat, and localized fat on arms, thighs, hips & back.

The safety of the procedure is a result of the amount of fat removed, the choice of anaesthetic agent, and the overall health of the patient. Ideally, a patient should be as fit as possible before the procedure and should have given up smoking for several months. 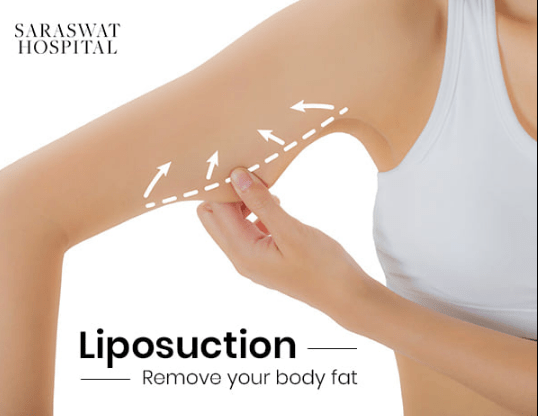 Who is the Best Patient for Fat Removal Surgery in India?

The perfect candidate is above 21 years, in good health and has a proper diet and exercise schedule. Diabetes, heart disease, and other medical problems are considered a risk for such a procedure. Results are commonly less visible in older people, as their skin is less elastic, and does not tighten up easily to the new shape. In those cases, abdominoplasty (tummy tuck) can be an add-on along with the fat removal surgery.

The suctioned fat cells are permanently removed once the operation is complete. However, if the patient doesn’t follow a proper diet and exercise pattern, the remaining fat cells can enlarge, creating a false impression of regaining the weight.

The possibility of a probable complication increases when very large areas are treated, and a large amount of fat removal is demanded by the patient.

At Saraswat Hospital, Agra, we generally suck out a maximum of 5 litres of fat per patient. We keep them divided in a few syringes to correct any irregularities if present.

We have often seen patients who have already undergone liposuction surgery elsewhere with contour irregularities, where the treated areas have a bumpy appearance, due to uneven fat removal. These changes can be permanent.

We treat such cases by performing syringe liposuction using specialized instruments to ensure minimal damage to the harvested fat cells and re-inject them into irregular areas. So, if you have had any such complications with prior procedures, Dr. Satya Saraswat will take care of it as well during your fat removal surgery.

Dr. Satya Saraswat is a member of ISAPS – International Society of Aesthetic Plastic Surgery and regularly attends the International Conferences and Workshops to keep himself updated with all advances in this field.

At Saraswat Hospital, Agra, we take complete precautions before, during, and after the liposuction procedure.

Liposuction Before and After Result, Paitent Case #3634

Liposuction Before and After Result, Paitent Case #3638

Liposuction Before and After Result, Paitent Case #5359