In tattoo removal, the target for the laser light consists of small particles of tattoo ink which are found either within macrophages or scattered extracellularly throughout the dermis.

Q-switched lasers are the mainstay of therapy for both benign pigmented lesions and tattoos. 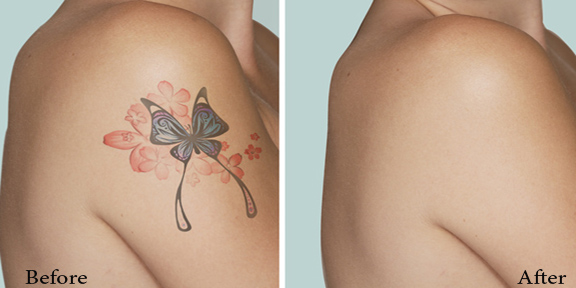 The recent growing trend of decorative tattooing among teens and young adults has led to an increase in the number of patients requesting tattoo removal. Most tattoos encountered today are professional tattoos which are more difficult to remove than the amateur variety, due to the fact that they are often composed of multiple colors of inks placed at a variety of depths within the dermis that are often impossible to remove completely with the current technology. Different colours of tattoos require different sources of lasers for removal which practically is very difficult to find in one medical facility.

Thus establishing realistic expectations for every patient is paramount in achieving a result with which the patient will be satisfied.

How Many Sittings are Required?

It must be emphasized that multiple treatments are normally required and may vary anywhere from five to as many as10 in number. Furthermore even after numerous treatments, some tattoo pigment may still remain.