Published on July 22, 2020 by Saraswat Hospital 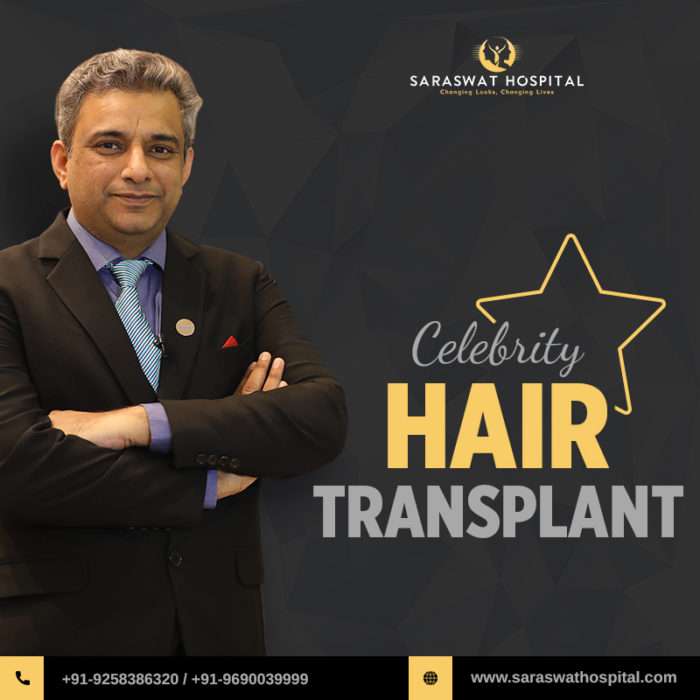 Celebrities are those well-known people across various fields of interest who are idolized by the audience, if not more. In such a situation, they have no other choice but to maintain a steady ever-evolving look. To achieve this, however, they have to go through vigorous rounds of regular styling that includes the use of heat and chemicals. Needless to say, this leaves an effect on the growth of natural hair, ultimately leading to hair thinning and loss. More often than not, this hits celebrities during the peak time in their career, and thus, they have to resort to surgical means to restore their look. This blog would mention the various celebrities who had undergone successful surgeries by the best hair transplant doctor in India.

1. Mr. Govind Namdev – Undergoing vertex hair transplant was one of the most significant decisions ever taken by senior Bollywood actor, Mr Govind Namdev. Upon hearing numerous positive reviews about the clinic when he finally ended up visiting the centre, he could not help but feel positive in the aura that was present all around. Dr Saraswat chose to explain the procedure and what went wrong with him in broader detail before going straight to the method, comforting him more. A result was visible almost right after the procedure ended, making them have faith in the results even more.

2. Mr. Raju Shrestha – An actor par excellence since childhood, Master Raju, at this time in his career, several years down the line, was facing hair fall on the temporal side. A surgery to solve the issue was immediately required, and his film industry colleagues referred Saraswat Hospital to him. Given the complexity of the issue, Dr Saraswat went on to explain how the thinning transpires and the ways one can make it better. Within almost a day of the procedure, Mr Raju started to see exceptional results which were more than what he could have imagined at the beginning.

3. Mr. Raju Raikwar – Also known as junior Shahrukh Khan, Mr Raikwar found what he was always looking for in the form of Saraswat Hospital, and the hair transplant procedures performed there. He has been suffering from hair thinning for a long time at the peak of his career. Initially, when it started, he ignored it, but when for three years it didn’t stop and ended up balding, he needed a solution. Dr Satya Saraswat came to his rescue and performed a Follicular Unit Extraction (FUT) procedure and implanted around 2500 grafts.

4. Mr. Ayush Jadeja – Popular as a Gujarati superstar and mimicry artist, Mr Ayush Jadeja was in a mess when he first consulted the experts at Saraswat Hospital for transplant surgery when his friend suggested about the same. He started wearing wigs in the beginning but was quick to realize that only a transplant surgery could give him the natural results he was expecting. 3000 grafts in the form of an FUE procedure was implanted, giving him 6000 natural hair in just a few months.

5. Mr. Rajiv Verma – Initially scared about the hair transplant procedure, director Mr Rajiv Verma decided to visit Saraswat Hospital and consult with the experts. His decision was not wasted at all as Dr Satya Saraswat explained to him what the process was about in further detail and told him how quickly the results would be visible. His hair thinning at the crown area was subject to the procedure following which he could instantly see a natural hairline and hair within just a few months.

6. Mr. Ravi Jhankal – Famous Bollywood actor and theatrician, Mr. Ravi Jhankal has been suffering from hair thinning for quite some time before he decided to take the major step of going for a hair transplant surgery. Dr Satya Saraswat suggested working on the major growth of hair especially at the hairline and the middle of the scalp for the actor before moving on to explain what the procedure is all about. Over six hours and 2500 grafts of the procedure, Dr Saraswat ensured a painless but effective experience for the actor.

7. Mr. Dinesh Lamba: After gaining huge success in the Hindi and Tamil movie industry over the years, Mr. Dinesh Lamba’s subsequent hair fall could only bring him down. In the part of his career where he had to ensure that nothing went wrong as such, Mr. Lamba went on to coordinate with his colleagues and find out about Dr Satya Saraswat, practising hair transplant surgery in Agra. He was not only excited about the procedure but had faith that his baldness would be hidden by the same. Dr Saraswat eased the actor into the process by narrating every single step as and when performed. The local anaesthesia did its trick and he couldn’t even realize when so much time had passed by.

ABHRS certified doctors at the hospital performing the treatment

Along with these top five celebrities, many others have undergone hair transplant at the experienced hands of Dr Satya Saraswat. Apart from being a Gold Medalist Plastic Surgeon, who has been awarded by the Honorable Health Minister of India, Dr Saraswat is also a diplomate of the American Board of Hair Restoration Surgery (ABHRS). To add to his resume, he is also an MBBS, MS, M.Ch, and DNB holder.

Saraswat Hospital also hosts Dr Preeti Saraswat, a diplomate of the same prestigious American Board who is a Clinical Cosmetologist. Both the doctors, along with their team of experienced professionals, strive everyday to provide the best of services using modern technology to all patients who visit the clinic.

Conclusion: Hair transplant is a very personal procedure which can make or break your entire look, and that is why you must always visit professionals who are well aware of what they are doing. Saraswat Hospital in Agra performs a wide range of ethical and safe procedures with a minimum to no downtime. Should you want to book a consultation with the best hair transplant doctor in India, get in touch by dialling +91-9258386320 or +91-9690039999.